Yesterday was hot. HOT. Dry, thirsty hot. Our county is experiencing a severe drought, even after a bit of rain, and the plants are feeling the burn. The grass in the yard crunches under your feet. So, what to do when the sun is out, the grass is crunchy, and the kids want to play?! Go fishing! 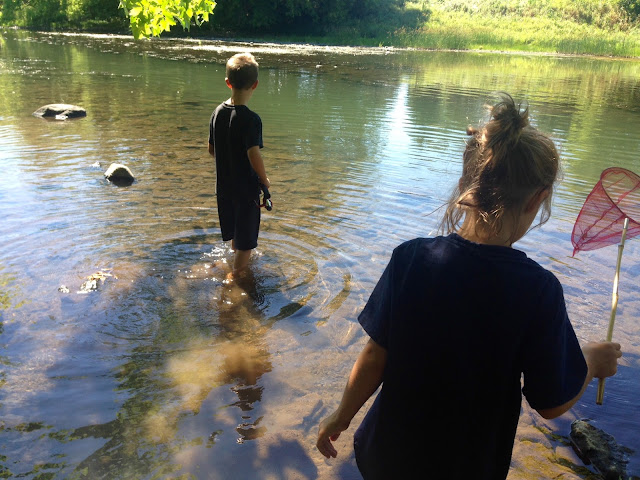 Matt took his trusty fishing rod from Uncle Gregg, Clare grabbed a net for catching butterflies, dragonflies, minnows and crayfish, everyone put on some shoes for water wading, and we were on our way! 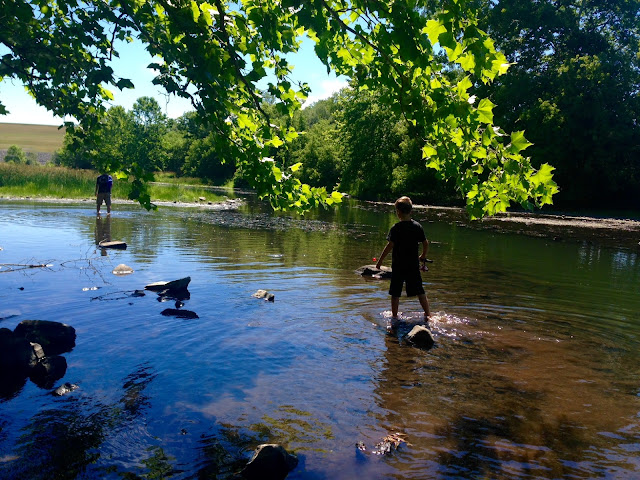 There's a quiet place to explore near the base of a local dam, and the kids love it. The boys walked off together to fish, so Clare and I enjoyed some girl time and I let her lead the way! 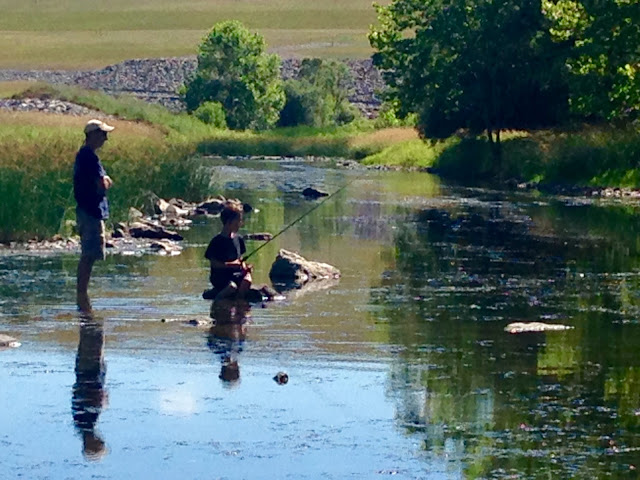 Clare would make an excellent tour guide. She thoughtfully warned that the water was cool before I took a step into it, but that it'd feel really nice on a hot day. She was right! She showed me that if she walked like Godzilla through the water (while demonstrating slow deliberate steps) that it created brown clouds in the water that looked like nuclear mushroom clouds. 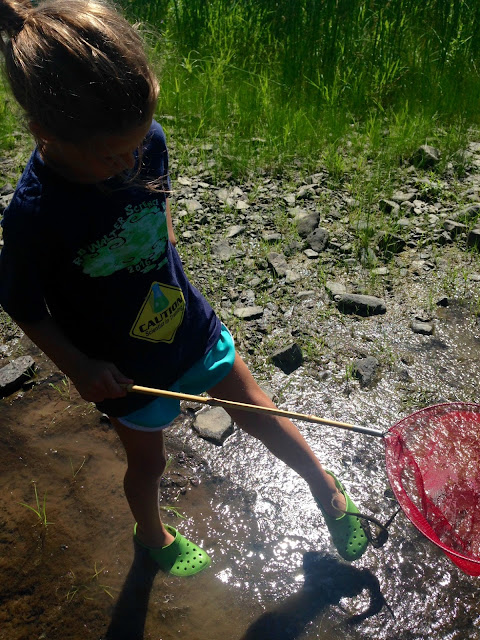 She showed me how to kick the muck off my feet, and giggled when it plopped into the water. "That was fun, right mom?" Asking "right mom?" occurs at least 20 times a day, and I love it. She's looking for me to say "right Clare", to let her know she's on to something, she's had a good idea, and it makes her proud. 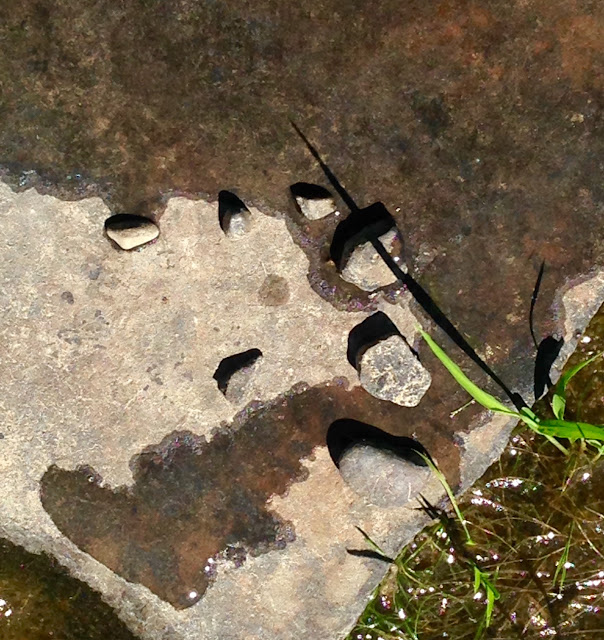 There was so much to explore! We discovered these tiny rocks arranged together and decided that it looked like an arrow. Where did it come from? Why was it there? It was a great opportunity to use our imaginations and clues to form a hypothesis and develop a story. Sometimes our stories get a little silly and may involve aliens, mermaids, or frog dance parties. You just never know, and that's part of the fun. This looked like the work of frogs pointing to their dance party, obviously. 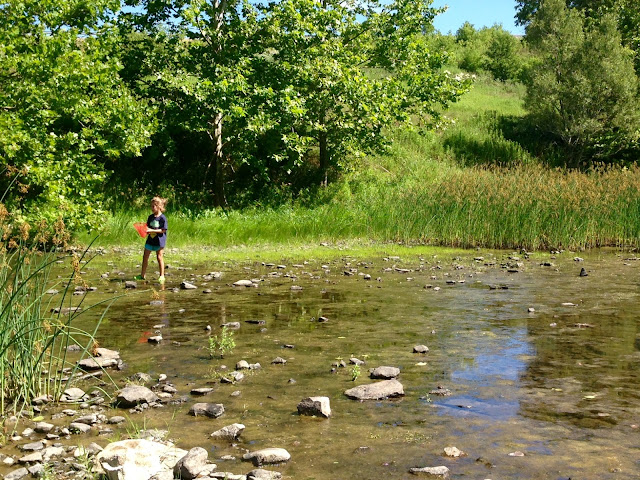 The tall grass was full of excitement. Dragonflies ranging in size and shades of greens and blues dashed about and kept Clare busy in her attempts to catch them with her net. The girl has balance! She didn't slip once on those slippery rocks, and I was impressed. 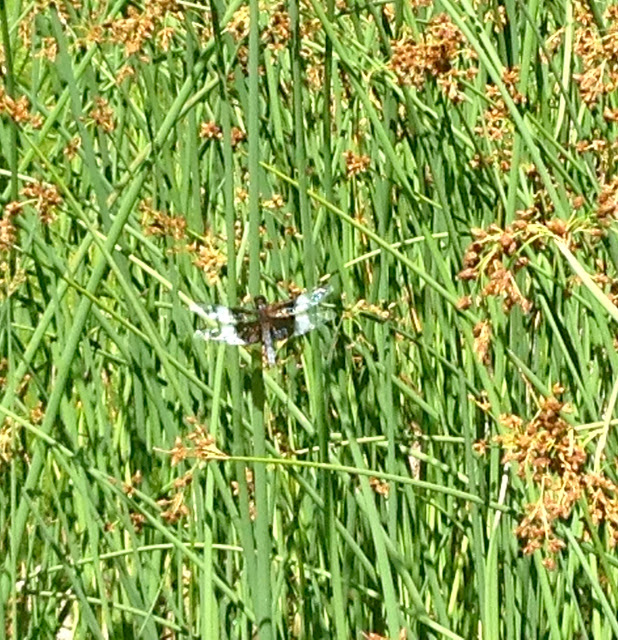 After tiring of dragonflies we decided to look for crayfish. They're fast! Any movement in the water caused a swirl of brown ick that cloaked the crayfish long enough for them to find shelter under a rock. It was like playing hide-n-seek! You knew they were under a rock, but which one..... 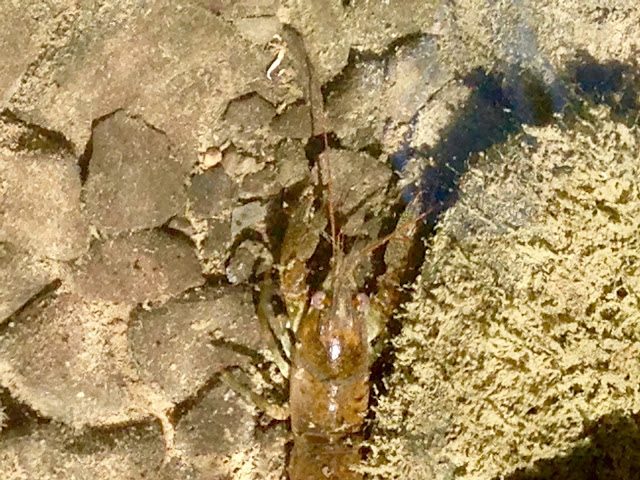 Boy were they fast! But Clare was faster and she caught one! 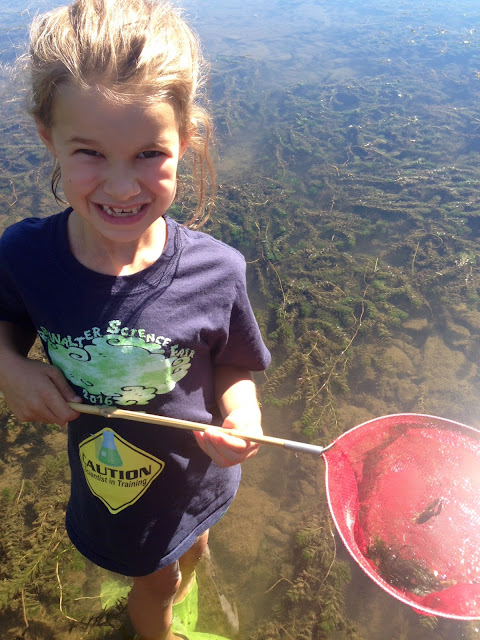 There were other neat-o things to notice in the water too. We found another heart rock for my friend Joan! Joan would have loved playing in the water with us... 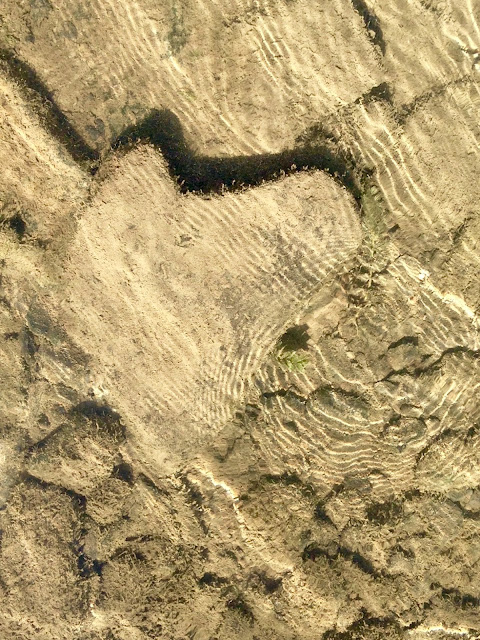 We thought the shadows in the water from this leaf resembled the dots on the tail of a redfish! Uncle Gregg would be proud! 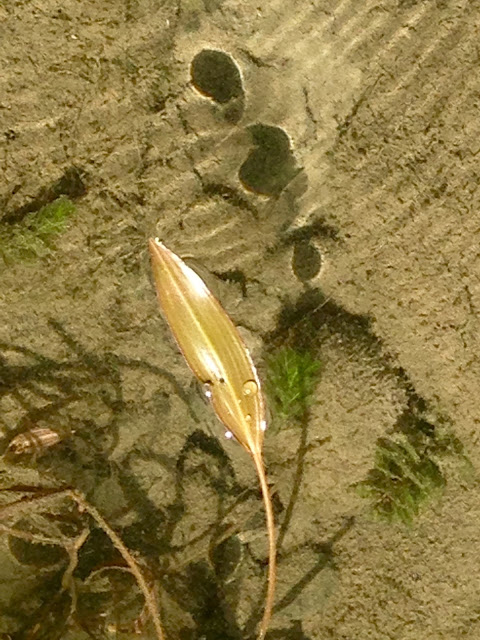 There were fossils. Some had the markings of tiny seashells. How did that happen? We don't live by the ocean. Great conversations can be started from the questions of children. 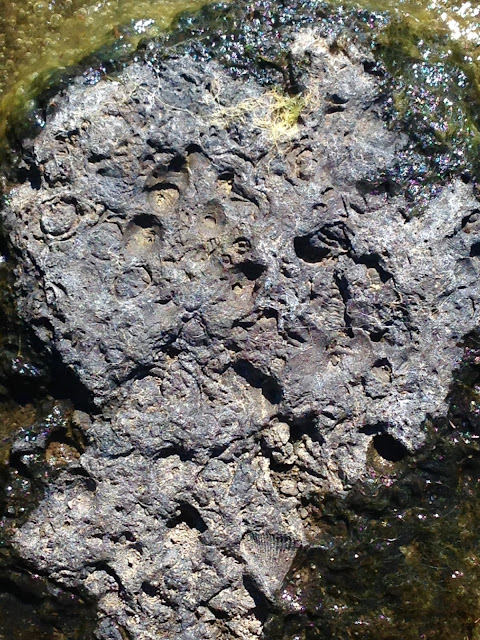 Do you see shell imprints? 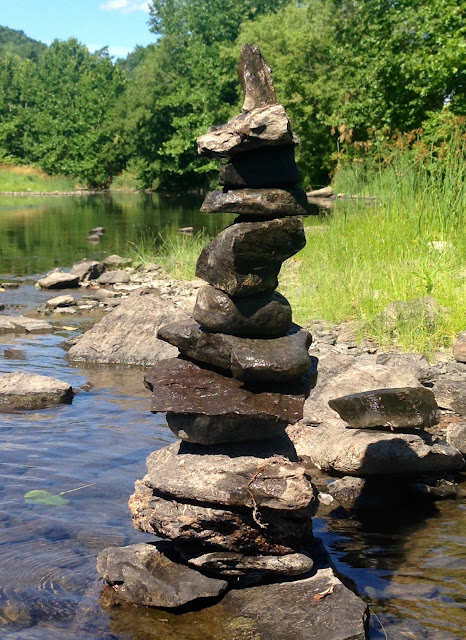 A few weeks ago we noticed someone had created rock balancing sculptures along the rocky hillside at the top of the dam. We decided to give it a try. How hard could it be? Just stack 'em up, right? It looked easy enough. Well, it's surprisingly a lot harder than it looks. It toppled over several times, but the splashes were refreshing in the heat and we had a lot of fun. 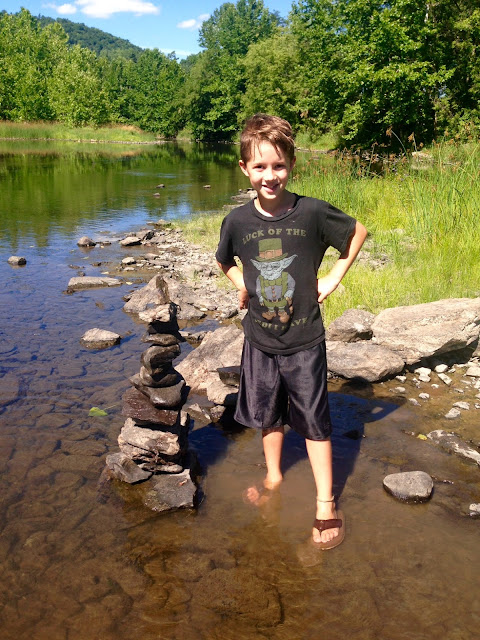 When we needed a rest we sat on a big rock with our feet in the water and looked around. There were seeds floating about that would land in the water and slowly glide along the top. We practiced our aim and tossed rocks at them, using words to described the sound of the splashes, like "kerplunk", "blup", "plop", "bloop", "splish", "swoosh", "splosh", and many many more. Bigger rocks made bigger and deeper sounds. 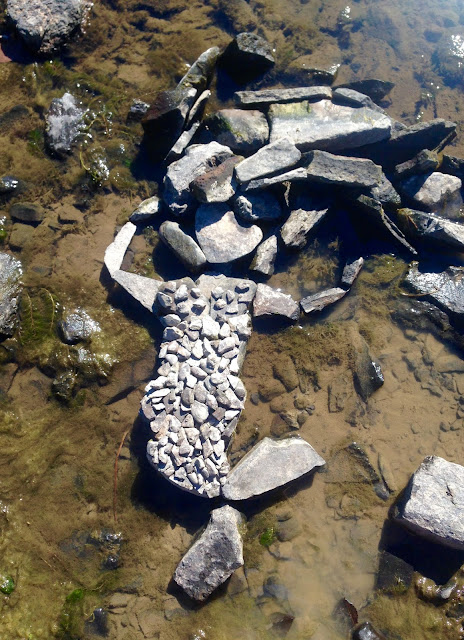 Matthew returned to his fishing so Clare and I continued playing with rocks. We worked together to find rocks to form a mermaid in the water. It was like making our very own puzzle! Clare did a great job using tiny rocks to make the scales. We brainstormed ideas for how to make her hands and hair. There were all sorts of things we could have used, but decided to stick with rocks only. We experimented with making faces and decided she looked better without one. Wouldn't it be cool for someone else to find it while they're out exploring? What a cool surprise! 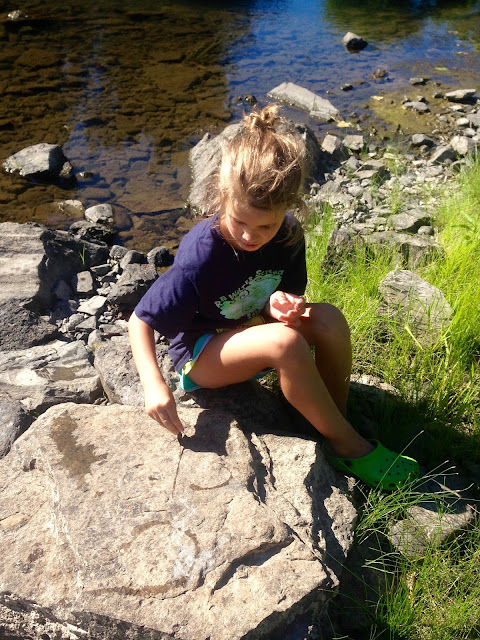 Rocks also make excellent desks and chairs. Clare pretended she was an artist working on signing her name with wet muck from the water. Resourceful! It took a couple of tries. The sun was so hot it dried up her letters before she could get to the "e" at the end of her name! Can you believe that we forgot to take water along with us to drink?! Crazy, right?! A truly terrible plan. So, we decided to stop for a Gatorade treat on the way home and chatted about our favorite parts of the day. There were A BUNCH of favorite parts! Had we remembered to take water, the day would have cost only a bit of gas to get there and a few hours of our time. A day well spent, an investment in our children worth making, and a fun day all around.

Great post. I 'm confronting a couple of these difficulties.