Lines are super important in art. We need to be able to draw them, turn them into cool stuff like monster teeth, wavy hair, rolling hills and mountains in our drawings, and make patterns with them. We've practiced lines so much that we're totally line experts! So when students came to art this week I had 2 "rainbow" lines on the floor made with construction paper to talk about. Kinda weird, I know, but there's a lot more going on here to think about than meets the eye. How many lines do you see? Most of the kids said 2, which makes sense because that's how many I made with paper. Just a few raised their hands because they saw 3. 3 lines?! Where are they getting 3 from?! Well, the space between the lines creates a 3rd line. It was a pretty cool thing to notice! They told me what type the lines were (zig-zag). They noticed that the colors changed in the same order as the giant colorful crayons I have hanging from the ceiling. This was all really good thoughtful stuff. This brainstorming together was getting us ready to learn about an artist who used things in nature to do very similar things. It would help us talk about his art. 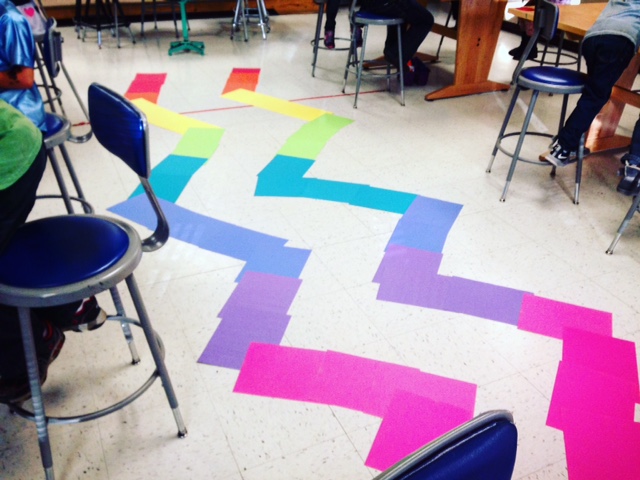 We looked at a black and white picture of Andy Goldsworthy and talked about his hat (I'd post a pic but copyright is an issue, so google him and you'll know what I mean!). Where would you wear a hat like that? Texas! A cowboy wears a hat like that! An explorer guy! We decided together that he must really like being outside. It definitely a workin' outside kinda hat. Andy Goldsworthy is a famous British artist known for his land art. Land art is made with materials found in nature, like soil, rocks, sticks, logs, and other organic materials (leaves, plants), and water elements (ice, snow, water). Some fade away quickly, while others last many years. Then we started looking at his art. We focused on examples of his work that featured lines we know. We thought about is work, asked questions, talked about it. I asked the classes what his art was made of. Leaves! Sticks! Sand! Ice! Rocks! Why do you think he took a picture of it? So he could show people! Will this last forever? No! And they were right about all of those things. Why wouldn't it last forever? The wind could blow the leaves away! It might rain on the leaves and they'll get mushy! They'll turn brown and crunchy! People walking in the woods might step on them because they didn't know it was there! These were all good thoughts. Any of them could happen. We talked about what he made and how he made it. 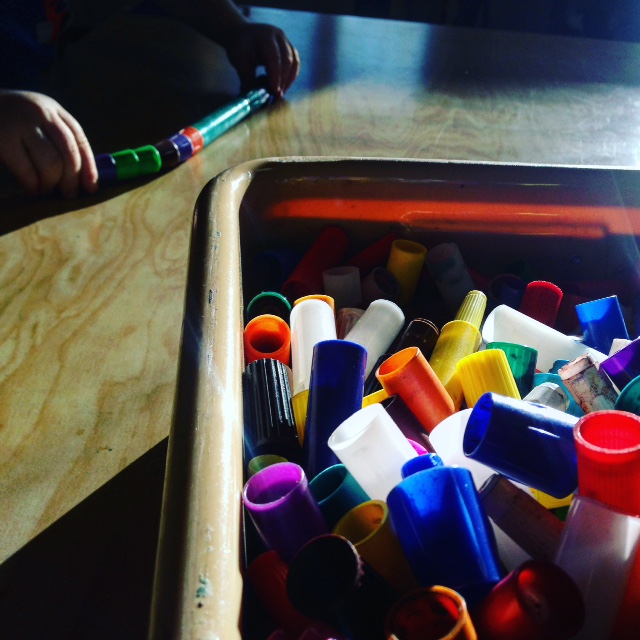 We decided to practice making lines we knew in our classroom with art supplies we had inside. Students worked with the people at their table as a team to make one of the lines we know. We tried to keep in mind little things we learned about Andy Goldsworthy and his art while we worked. Each table was given something different to work with. Even tables that chose the same line approached them very differently. The marker cap table connected the caps so they wouldn't roll away while they worked. Problem solving. 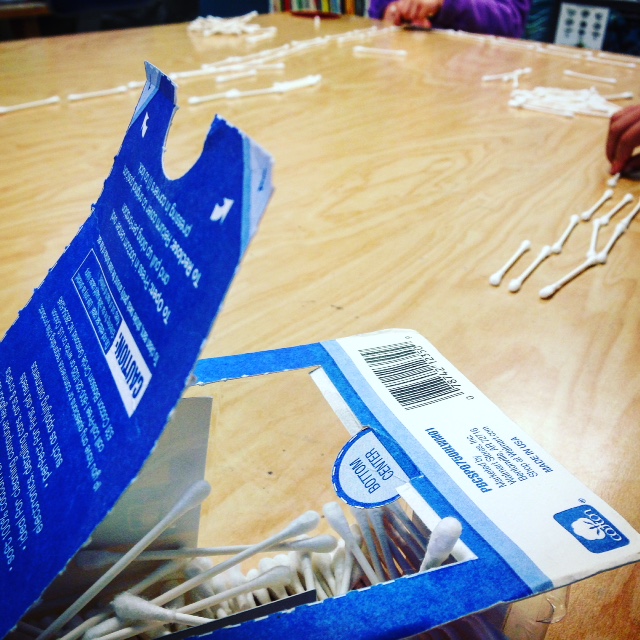 The q-tip table chose to do 3 q-tip lines, explaining that the spaces between them were also lines. They worked really well together, wrapping their straight line around the edge of their table. 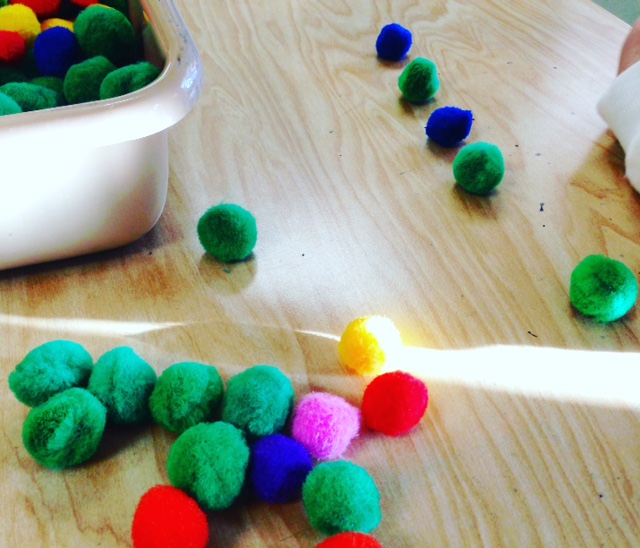 The pompom table said their line was a dotted line, using each little puff as a dot. They started out straight but ended up making it into a large curvy line that wiggled around their table. They had pompoms of various colors and sizes to work with. Some students preferred the tiny pompoms because they were so cute, while others liked the bigger fluffier ones. 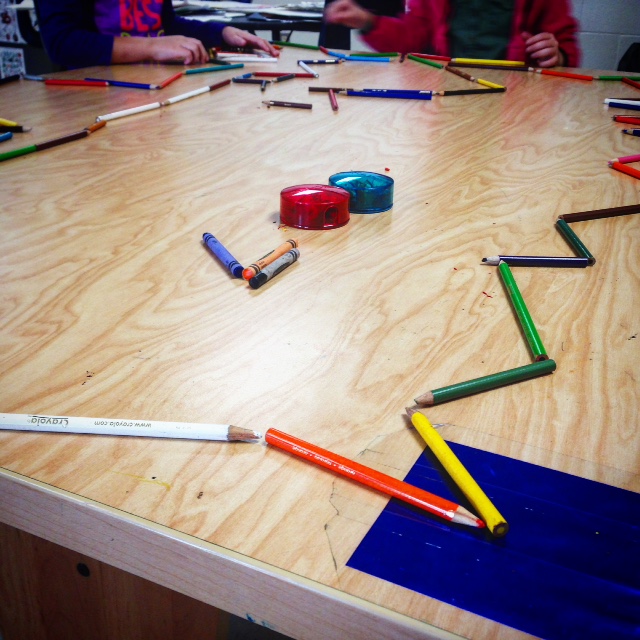 The colored pencil table created a large zig-zag line that zig-zagged around their table. Items that didn't belong in their colored pencil bin and weren't useful in their line making were banished to the middle of the table and out of their way. 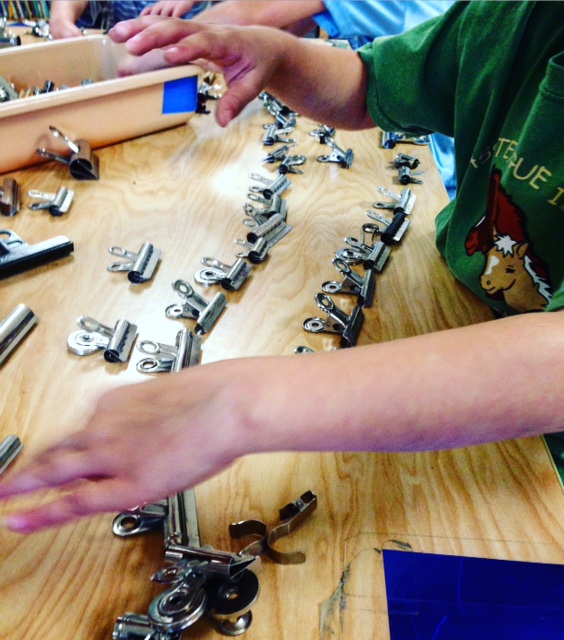 The clip table had fun sorting through the various sizes and types of clips in their bin. They made several straight lines on their table using the types of clips to change the sizes of their lines. 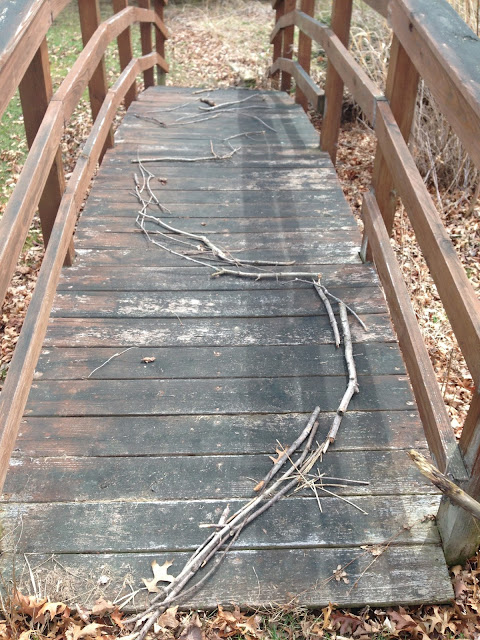 The last fun step is to get outside like Andy Goldsworthy! Students can use things they find on the ground (we don't want to harm living plants) to work with their team to create a line. Groups decide before going outside which line they'd like to make. We talk about what our materials can be, and they begin gathering them as soon as we step outside. 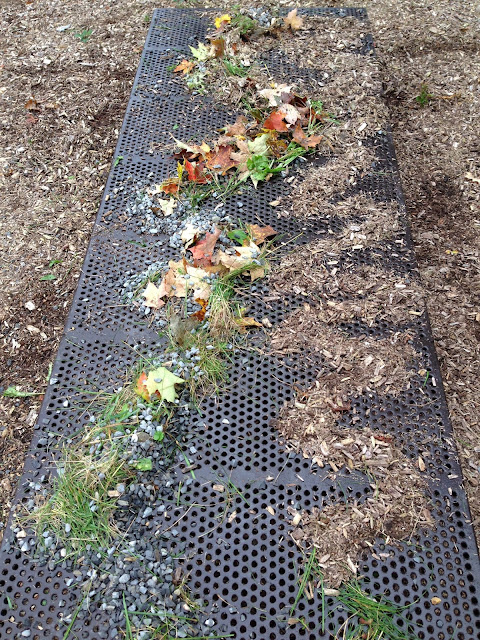 In addition to materials and type of line, students must choose a location for their artwork. 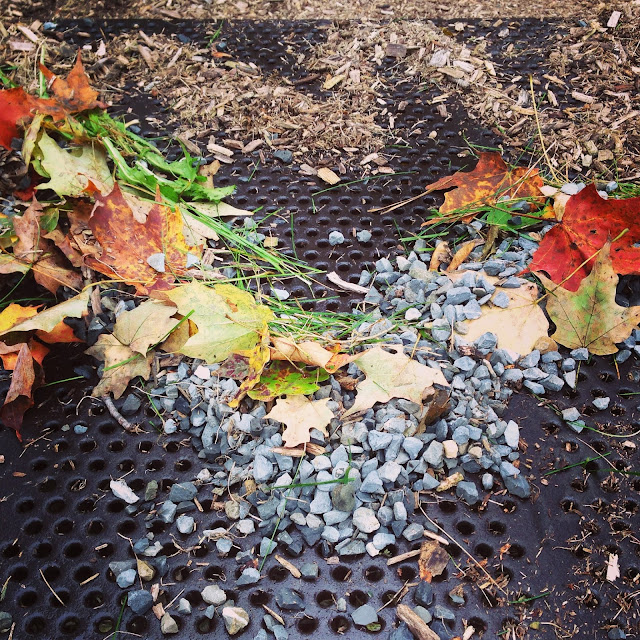 We visit the various lines created by the groups and discuss them. We talk about what type of line is created, how many lines we see, what materials were used, where they chose to make the line, and any other special things we notice about the final work. Did they change the thickness of the line? Did they use a color gradient like Goldsworthy often did? Then we photograph it like Andy Goldsworthy because it won't last forever! Line adventures are fun for all and can be enjoyed at home too! Try making shapes you know and faces with things you find in nature, and be sure to take a camera along to capture it!