I love sentimental traditions. This is a big time of year for such things...Baking holiday cookies to share, large family gatherings with recipes that have been passed down for generations, dishes that only come out for big events, special ornaments for Christmas trees. I've learned many lessons from having traditions, made many fond memories, and enjoy continuing them with my own children. Each Christmas season I think about my childhood neighbor, Mrs. Carpenter, who was part of several memorable traditions. She was a very tiny woman who had a very large white house, a perfectly manicured lawn, and quite a book collection. She was an influential person in my life. She took me to get my very first library card. We'd get new books regularly, walking to town together. She let me "help" her gather up her raked leaves in the fall, placing them in wire baskets to dump in the woods behind her home. She was a retired teacher, she was old school, she was so incredibly smart and kind in her own way. I admired her greatly. 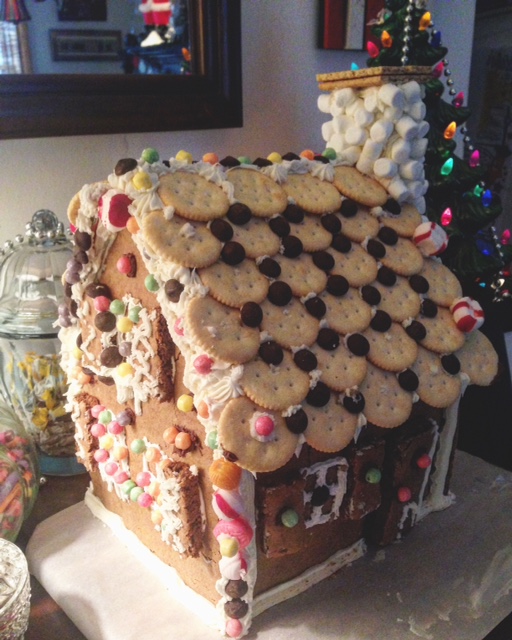 She started a Christmas tradition that I've carried on with my own children: the seasonal decorating of a gingerbread house. Each year Mrs. Carpenter would assemble the gingerbread house from a kit before I went over to decorate so it was ready to go when I got there. I loved it! The goal was to decorate it even better than the previous year. She would encourage and praise my efforts. The tradition lives on!!! Each year I purchase a gingerbread kit for my own children, similar to this one. I assemble it, my children decorate it, and they love it! There's always a lot of taste testing of the candies. You know, just to make sure they're good enough for our sure-to-be-amazing gingerbread house. A family favorite are SweeTarts mini chewy candies. We hide them from my husband until our decorating is complete, he can gobble up a bag of those in no time at all! 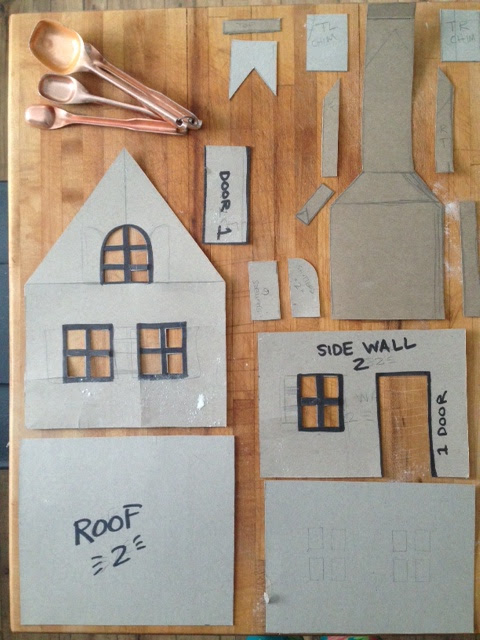 This year our family took turns battling the flu, so I didn't get out to purchase the traditional gingerbread kit. Ugh! At least it passed through before Christmas break! My daughter and I were home with fevers, on the mend from the worst of the flu storm (whew!), and she asked if we could try to make our own. Hmm? Yes, what a great idea! We had never made one from scratch before so we researched gingerbread houses for ideas. Clare liked a lot of things! We sketched, measured, cut, and planned together. She would be a great foreman and/or architect. It took longer than we thought it would, but we were excited! 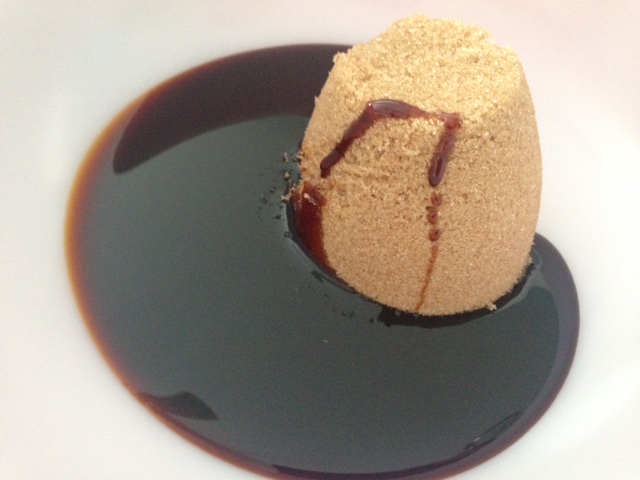 We looked up a gingerbread recipe online and set to work mixin' it up! Clare thought our molasses and brown sugar looked like a sandcastle with a moat. Ah, a beach sounds pretty nice right now... 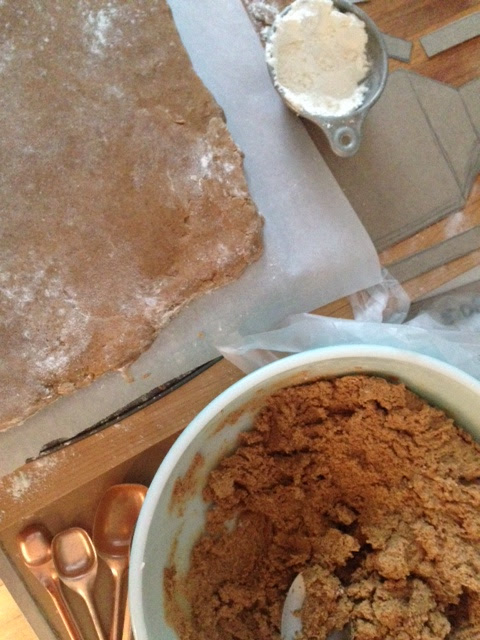 Clare helped scoop dough from the bowl to roll it out on overturned cookie sheets covered in parchment paper. The lip around the rim of the cookie sheets would have been a problem while rolling out our dough, so we flipped them over. Worked like a charm! 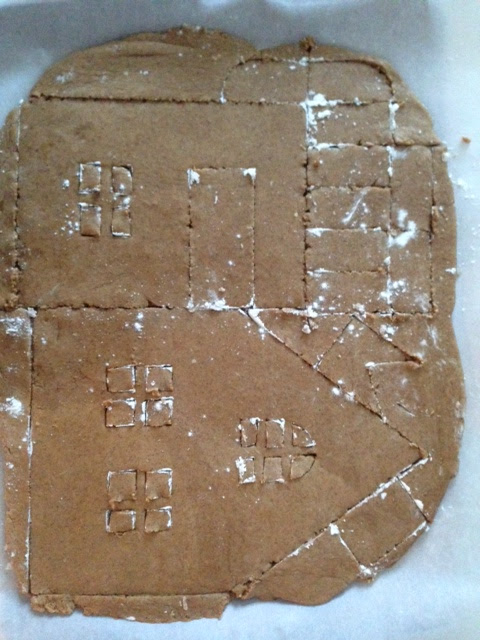 We worked together to arrange our cut template pieces on the surface of our dough. We had to roll out a few slabs in order to have enough pieces for our house. After our template pieces were in place, we used a small knife dipped in flour to cut around them. The dough was a bit sticky, even after chilling, so the flour helped prevent the dough from sticking to the knife and gobbing up our cut lines. The recipe we used said to bake the pieces inside of the slab they were cut from, so into the oven they went! 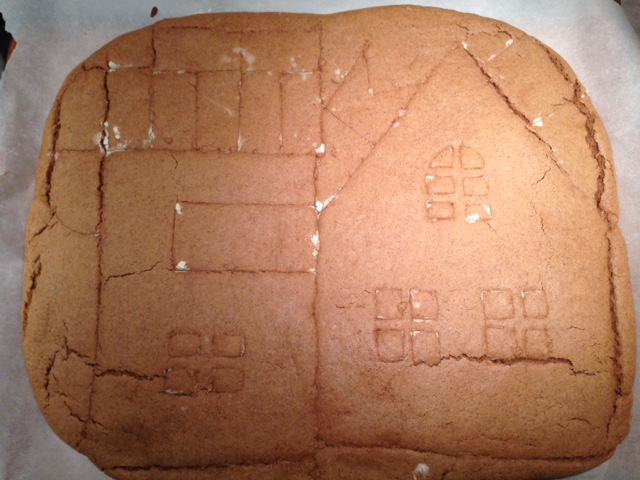 When it came out of the oven the pieces were slightly distorted. Following the recipe directions, we replaced the template pieces and cut around them again, then let the pieces cool on the pan. 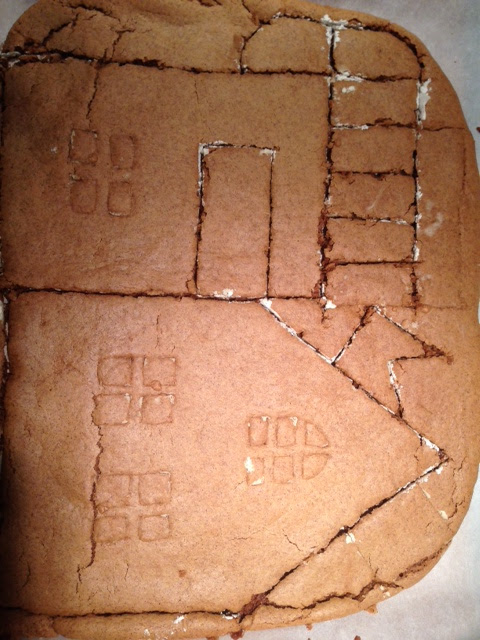 We decided not to try cutting out the windows, as we'd originally planned to do. We would simply trace them with frosting later. Two of our pieces really cracked, a roof piece and a wall piece. The roof piece was waaaaaay beyond repair, crumbling to bits, but we were able to save the wall piece. To replace our roof piece we mixed up sugar cookie dough (a Mrs. Carpenter recipe), and set to work assembling the gingerbread house pieces that we did have while the dough chilled. 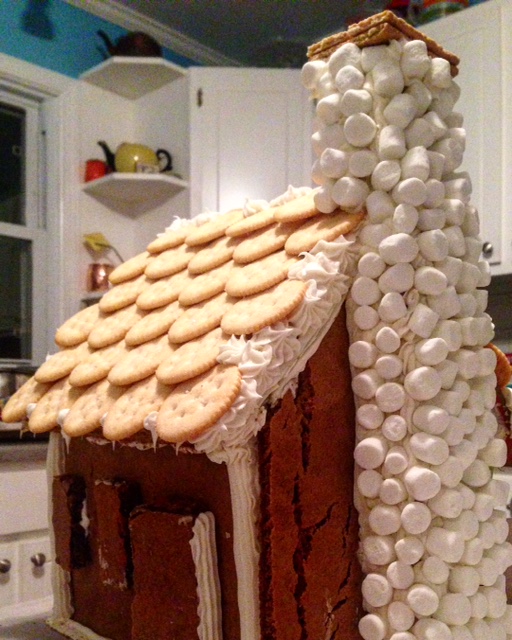 The cracked wall piece was becoming a real problem. It became weaker and weaker as we assembled the house. It probably would have been helpful to have a cardboard foundation under the cookies pieces to stabilize them (like cereal box cardboard). We didn't do that, lesson learned. Since the frosting stiffens over time, we decided to use it as a cement or grout for the broken wall pieces. We smeared it on the side of the crack, pushed the pieces together, smoothed the oozing frosting, and we waiting for it to set. To cover the frosting line crack we decided to use graham crackers to build a chimney. We covered the chimney in frosting, sticking marshmallows to it for a "stone" look. We were very pleased, and had fun creatively problem solving through this process! 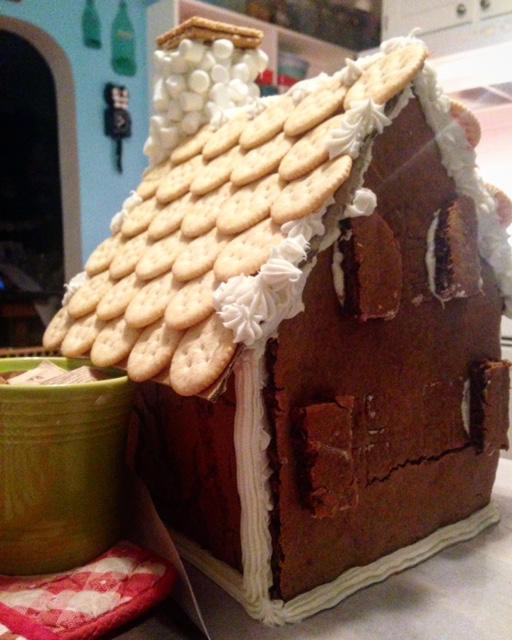 Back to the missing roof piece. By this point we were getting tired. I was baking birthday cake for my daughter while assembling this thing and wasn't excited about baking sugar cookies if I didn't have to (the dough could be chilled and saved for later). My husband suggested using the cover to an old book that he had laying around from scanning textures for another project. We giggled, but thought it was a neat-o idea! Nobody eats our gingerbread houses anyway, and it'd be a story. The cover really didn't want to stick to the house, so we propped it up with a Fiesta jar until the frosting had set really well. 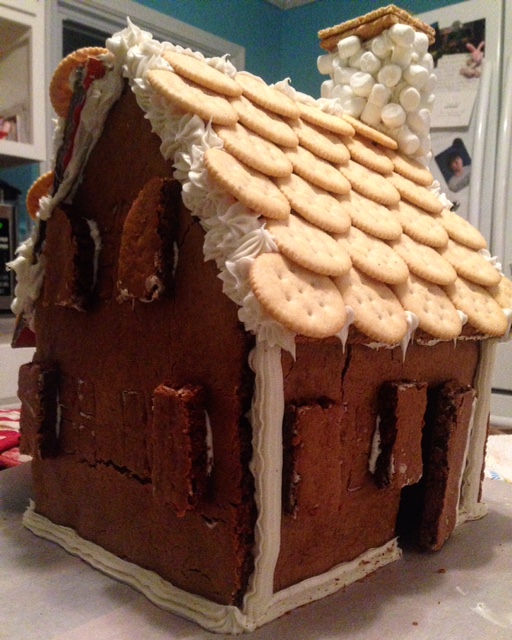 Our next problem was how to cover the roof to disguise our book cover without adding too much weight from frosting? RITZ CRACKERS! Having been so ill, we had plenty on hand! They worked PERFECTLY! 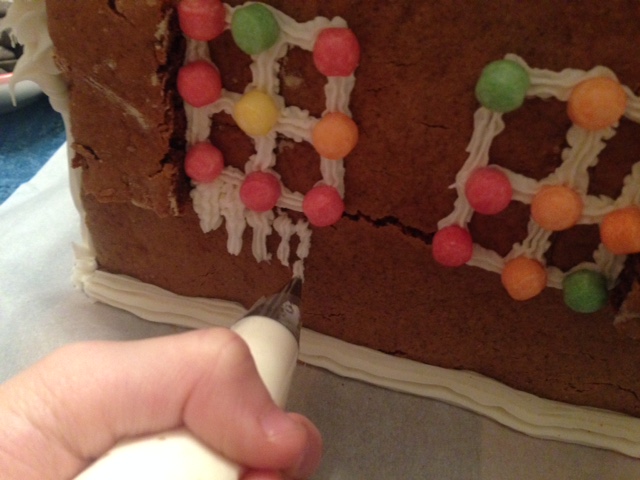 After drying and setting overnight, the house was ready to decorate! I had mixed up frosting for birthday cake decorating, so while I worked on cake decorating, the kids piped frosting and decorated our gingerbread house. This was a lot of work, but we all agree that it was our best house ever! We are definitely going to attempt to improve our gingerbread house building skills next year! 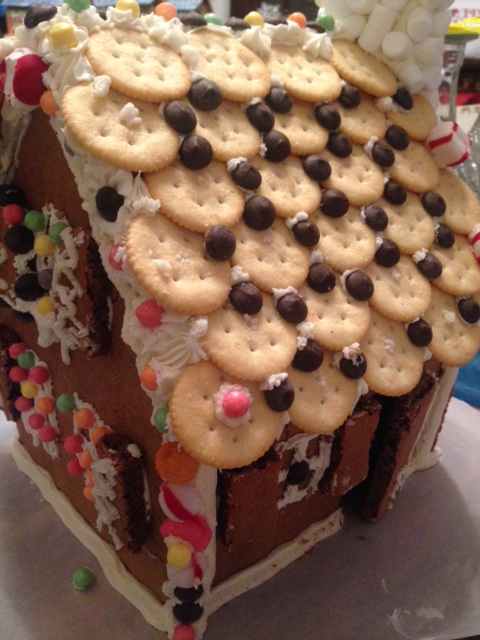